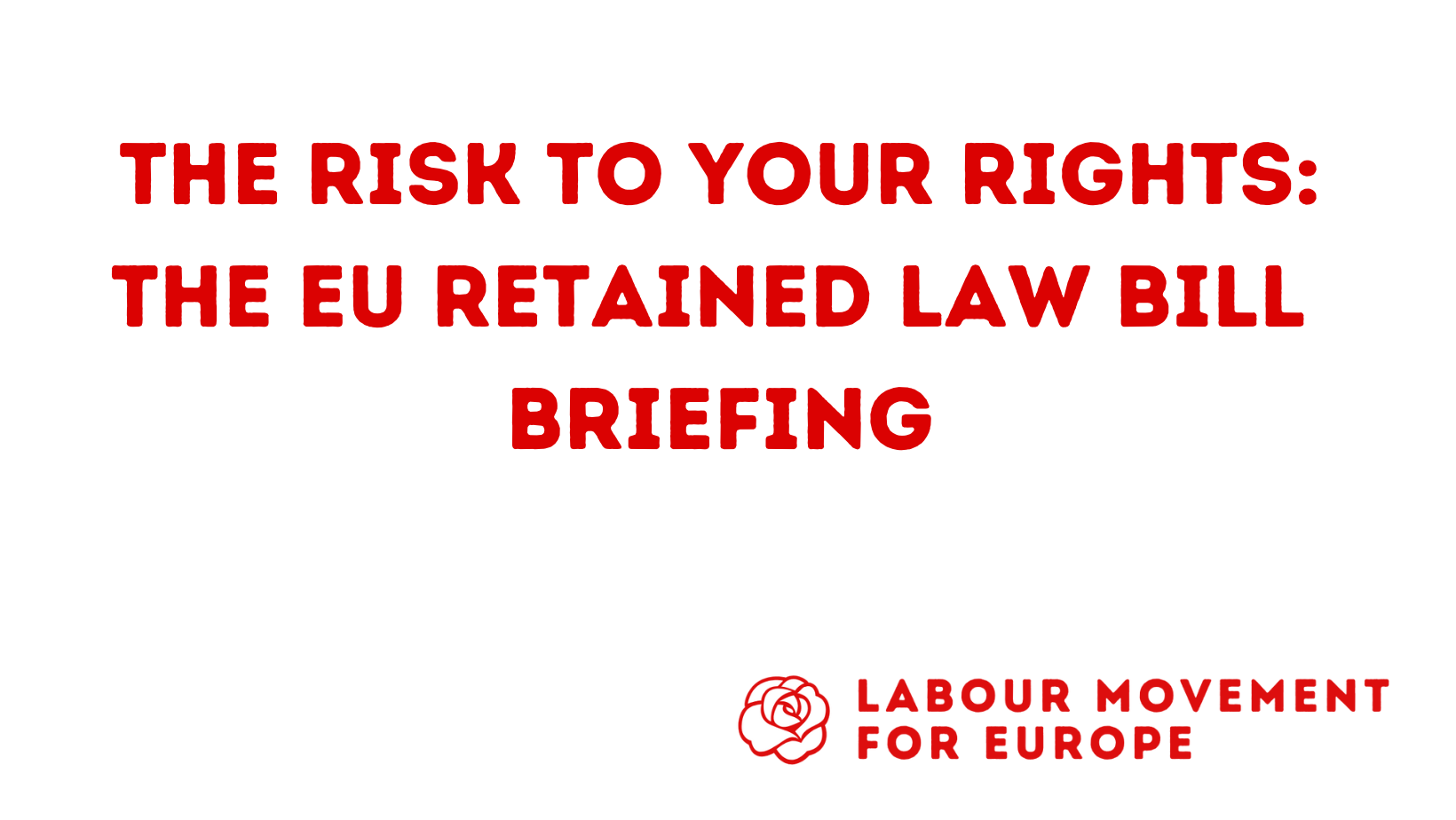 Click here for a suggested letter to your MP about this Bill here!

The EU Retained Law Bill rips up rights and rules upon which Britain has relied for decades. It not only deletes thousands of pieces of legislation, with no guarantee of any alternative, it enshrines in law the Conservative dogma that regulation is always anti-business, and breaks promises that Brexit would allow the UK to “go beyond” EU law, by preventing Ministers from replacing EU legislation with anything that offers more rights and protections.

This will affect over 300 different policy areas - from the rules around sports on television, to environmental protections, consumer rights and employment protections as well as airline safety rules. The Bill also gives Ministers powers to do this all at once, without consulting anybody, and to avoid parliamentary scrutiny of any replacements causing further chaos for millions. You can find here a link to a suggested letter to your MP about this issue asking them to oppose this legislation.

EU Retained Law Bill – Why is it Needed?

What does the Bill do?

What Rights are at Risk - and What Can Replace Them? The Deregulation Dozen

The Bill also explicitly requires that no legislation to replace any existing law can increase standards on these 300 areas of policy, as it claims this would negatively impact business. Specifically, under Clause 15(5), Ministers may not use any of the powers in this Bill, including the power to introduce new regulations to replace EU law, in a way which increases the ‘regulatory burden’ – meaning that this Bill can only be used to remove rights, rather than enhance them. This means it enshrines in law the requirement to deregulate in these areas of public policy, enshrining the Tory dogma that less regulation is necessarily better regulation.

With 2,417 pieces of legislation listed on the Government's deregulation dashboard and a further 1,400 uncovered by the National Archives – many of which are due to be automatically repealed under this Bill - there are few areas of protection which are not at risk. Here are a dozen examples of the laws it covers and so are at risk of disappearing all together:

While Ministers may claim certain rights are not at risk, there are no provisions in the Bill to safeguard this, and no means to ensure they are protected once the Bill becomes law.

There is also no requirement for Ministers to consult or inform stakeholders which pieces of legislation they are planning to retain, creating cover for them to roll back rights with no scrutiny and no opportunity for these decisions to be challenged before they happen.

What’s the Alternative? How Could You Reduce the Red Tape Brexit has Caused?

It doesn't have to be this way. Rushed deregulation will cause chaos for businesses, put livelihoods at risk and do little to help our struggling economy grow. By contrast, addressing the problems Brexit has created for trade would reduce the red tape which is causing so many small businesses to give up trading with our neighbours.