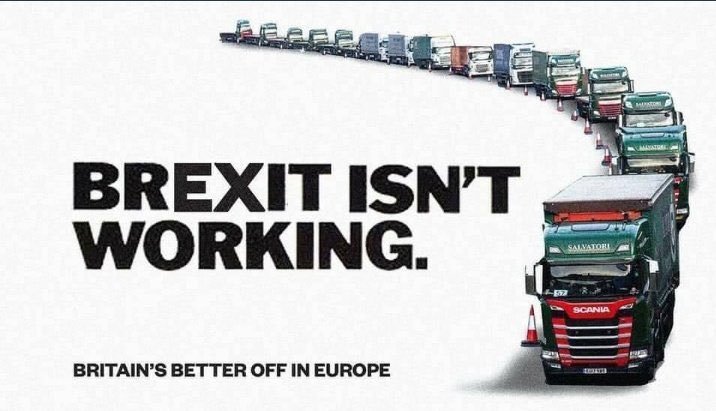 In my part of the world, we are gearing up for what we hope will be an historic victory in next year’s borough elections – seizing Wandsworth after more than 40 years in Tory hands.

At the weekend we began choosing candidates from a high-quality field. Confidence is high based on recent elections.

What’s our secret – apart from hard graft? Simple, we live in an anti-Brexit part of the country.

A Tory number taker told me “I voted for you. I’m a Remainer. But will our “luck” spread as voters realise what a disaster Brexit has turned out to be?

The media is littered with evidence that Brexit isn't working. Take the Times reporting an HMRC assessment that “British businesses will spend £7.5 billion a year handling customs declarations — as much as they would have done under a no-deal Brexit” - or the Mail on Sunday lambasting Home Secretary Priti Patel. Its headline reads: “Farms are set to kill and burn 100,000 pigs because of a post-Brexit butchers’ shortage: Industry chiefs vent fury at Priti Patel for leaving key staff off list.” And the Guardian reports the CBI calling for “the government’s shortage occupation list, which helps recruit workers from abroad to fill particular skills gaps, to be updated to include lorry drivers, welders, butchers and bricklayers.

According to the Road Haulage Association, Britain needs about 100,000 more lorry drivers, which it estimates will take at least 18 months to train enough people to fill the gaps.

And then there’s sewage. Guardian Brexit correspondent Lisa O’Carroll reports “first it was Nandos, then McDonalds, then IKEA. Now it’s [a lack of] sewage treatment chemicals."

It all convinces the Observer’s William Keegan that Leavers are changing their mind. He writes: “Brexit is an almost unmitigated disaster. The slogan ‘get Brexit done’ has been supplanted by ‘supply chain issues.’ As a direct, and wholly predictable, consequence of Brexit, Britain is economically, culturally, reputationally, politically and diplomatically poorer.”

Is he right? The latest YouGov poll for The Times found 39% think the Brexit vote was right, 48% think it was wrong and 13% don’t know.

And when YouGov asked voters what they thought main reason for recent food shortages and supply problems were two thirds of Remain voters and a fifth of Leavers cited Brexit. Perhaps that large bloc of Leavers willing to blame Brexit is an encouraging figure.

Here’s one buyer finally showing remorse - Simon Jenkins told Guardian readers in July 2016: “Ignore the prophets of doom. Brexit will be good for Britain. This week his tune had changed dramatically. “Boris Johnson’s biggest lie is coming home to roost. From plummeting trade to drastic shortages of workers, needlessly leaving the single market has been disastrous.” I suspect, however, it won’t be any shifts on views about Brexit that will deliver Labour electoral success.

Tory MPs are worried. They fear a voter revolt. The Sunday Express writes: “Red Wall could crumble over tax and pension plan ‘madness’.” The challenge for Team Starmer is to make sure those fears are realised.

Subscribe to our newsletter here if you haven't already to get these exclusive articles straight into your inbox.