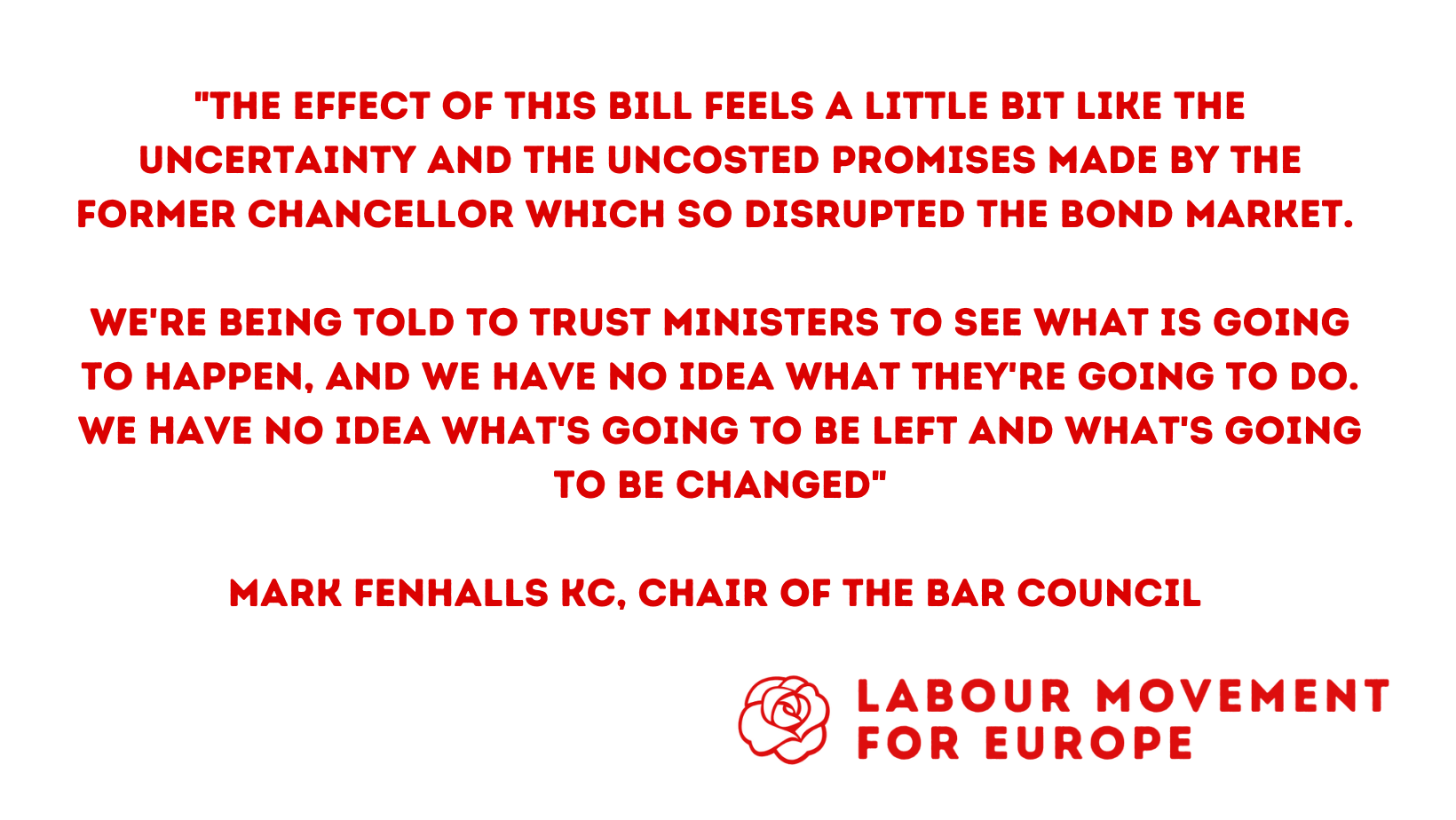 On Tuesday 8th November 2022, Parliament took expert testimony from lawyers, trade unions, environmental charities and groups and representatives of devolved administrations on the potential consequences of the EU Retained Law Bill. It rips up rights and rules upon which Britain has relied for decades. Not only does it delete thousands of pieces of legislation, with no guarantee of any alternative, it enshrines in law the push to lower standards. Whether it is putting bank holidays and annual leave at risk, or opening the doors to the return of battery farms, it is clear that the Retained EU Law Bill is nothing less than a wrecking ball aimed squarely at the rights and protections we all take for granted. Here are some highlights from today's parliamentary proceedings:

Following reports in the Financial Times, Ministers had to admit that more laws may be abolished as a result of this legislation than had previously been acknowledged. This Bill – purportedly aimed at reforming EU-derived law now we have left the EU – contains a sunset clause which creates a hard cliff edge in a little over a year, after which this entire body of law will fall away unless a Minister intervenes. Speaking in the Committee Ministers attacked witnesses who referred to this report- and then admitted that despite the legislation before parliament they still don't know what this covers and are still trying to identify its impact:

' the work was commissioned by the Government for the National Archives to investigate if there was anything else which needs to be explored. It hasn't be verified what these are or what the numbers are, if they are still in force or not.' Nus Ghani, Conservative Minister for State at the Department for Business.

Your Bank Holidays could be abolished ....

The Bill deletes these laws and as yet no alternative legislation has been put forward to replace these rights. There are over 300 different policy areas affected by this, reflecting how EU law and UK law are interconnected and so how destructive deleting these laws automatically could be. This was illustrated by the Ministers shock that the laws which entitle the public to bank holidays could be affected- in particular, EU legislation required UK citizens to have at least 20 days annual leave. UK legislation required that this was in addition to bank holidays - if this bill goes through and no alternative law replaces these requirements, then employees could have no right to annual paid leave:

" the UK allows for, through the EU derived provision, twenty days of statutory annual leave. That will no longer survive if that provision is sunsetted. There is also protection for eight additional bank holidays which is derived from the UK, but it is contained in the Working Time Regulations, so it is unclear whether those provisions would go along with the twenty days of statutory leave, leaving UK citizens with no provision and no statutory annual leave entitlement." Shantha David, Unison Lawyer

The Committee scrutinising this legislation heard evidence from environmental groups that over 800 laws relating to environmental protection, animal welfare and the natural world could be affected including the abolition of battery farming and protections to stop invasive species such as killer shrimp as well as threats to conservation. These environmental charities- including the Wildlife and Nature Countryside Link, the RSPCA, the Green Alliance and Unchecked whose members include the Mothers Institute, all called for the bill to be abandoned and for ministers to think again because they could not see any merit in this legislation at all.

"The British public does not perceive of these rules as burdensome. There is a real sense that they are protections, including environmental rules, and that there is a general sense that this is something we should be aspiring to...we should be aspiring to stronger standards than when we were part of the European union rather than weaker ones" Phoebe Clay, Unchecked UK

Its as destructive as Kwasi Kwarteng...

The bill heard from legal experts who raised grave concerns about the lack of scrutiny and powers given to ministers, the functioning of the sunset clause and the role that judges will be expected to play in deciding what happens to case law. They repeatedly argued that access to justice for those affected will depend on financial means, and that there will be multiple legal challenges if the bill goes ahead. In considering how destructive this Bill would be the Chair of the Bar Council compared the legislation to the chaos caused by the previous Chancellor Kwasi Kwarteng:

Ove the coming weeks, Labour Movement for Europe MPs including myself will be working with the front bench and other Parliamentarians to challenge the Government on these disastrous plans - you can help us by emailing your MP to ask them to oppose this chaotic and destructive legislation.

You can find a briefing on this Bill here and you will be able to find the full transcripts of these evidence sessions here. The next session of the Bill will be on Tuesday 15th November.